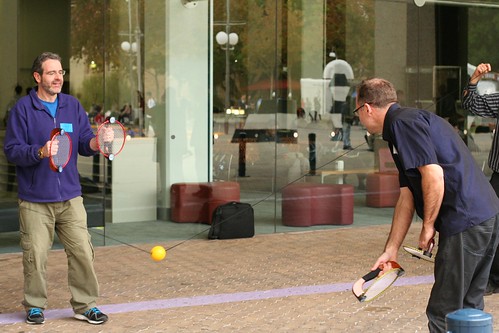 Back in June, we got to test out a nifty racquet-based game called Bok. Much to our delight, the creator of Bok, Claude Woodward, has recently been awarded a scholarship for the Curtin Ignition program to help develop Bok further! This is thanks to Claude following up on some of the advice given to him from the Playup, and it’s great to see the effect that the feedback of the day has had!

Congrats to Claude; hopefully this helps propel Bok to become the sport he so avidly envisions!

If you’d like to find out more about Bok, you can check it out on the official Bok Website.

Each playup, we playtest new games and game prototypes and give feedback to the designers so they can make them even better. All welcome: players, game designers, and those curious about becoming game designers! We love physical games, community games, hybrid games, street games, alternate reality games… or something we’ve never thought of yet.

Great news, this event is open to everyone 13 and over!

We will be playtesting

1.) Square Heroes is a fast paced comic arena shooter featuring competitive online-multiplayer modes. Up to 4 players can battle it out locally or join online matches together. Game modes include Deathmatch, Team Deathmatch and Capture the Gnome. Humanity is again relying on the Square Avengers to survive a vicious alien onslaught. Unfortunately for humanity, our Avengers are busy trying to win this year’s Best and Squarest tournament. Hone your skills by taking on the encroaching alien horde, or skip straight to the main event and challenge your friends to one of the hilarious and frantic online skirmish modes. Square Heroes is due for release on PC this October with other desktop and console platforms to follow.

2.) James Paddock’s ‘The Adventures of Square’: a new interactive game by James Paddock where you play as Square, a character in a mission to find the brilliant Doctor Octagon and rescue him from the clutches of the Circle of Evil, a mysterious cult hellbent on the domination of Shape Land. Square will square off against terrible monsters and impossible traps in order to prove that he’s no square when it comes to justice. Guide him to the center of the Circle’s domain, unravel their malicious plot, and win the day fair and square.

Why are we now charging for tickets?

We wanted to keep this event free and accessible to all while at the same time making it a useful resource for developers to test their games. As a free event, we found that we would get a lot of people signing up to come, but then not showing, which makes it very difficult for us to properly plan events and match the right number of attendees to the right number of games. This issue has become even more pressing now that the event has become quite popular. So, to make sure we can offer a fun and useful event, we’ve instituted a small fee for each event.

If, for whatever reason, you need a free ticket, please email us (kate at fti.asn.au) and we will get you a complimentary ticket, no questions asked.

Test your game at the next Playup Perth — Email kate at fti.asn.au or tweet @oceanpark

Playup Perth has been growing really fast. We’ve moved from every two months to a monthly event, we have a wonderful media partner, Gamecloud, we were featured on RTR and and our last event totally sold out! But with success also comes some challenges. We’ve always wanted to have Playup Perth be as accessible as it could possibly be, which is why we made it a free event. At the same time, we need to make sure the event is a useful resources for developers. We’ve found that we would get a lot of people registering, but then not showing, which makes it very difficult for us to properly plan events and match the right number of attendees to the right number of games. This issue has become even more pressing now that the event has become quite popular. So, this is why we’ve decided that in order to make sure sure we can offer a fun and useful event, we need to charge small ticket fee for each event.

But to make sure we are still accessible, if for whatever reason, you need a free ticket, please email us (kate (at) fti.asn.au) and we will get you a complimentary ticket, no questions asked.

See you at the next playup!