Friday nights don’t tend to be associated with board games for some insane reason. I don’t get the aversion myself since, after all, board games are way more social than packing yourself into an overcrowded bar and trying to make out what your friend just said. Thankfully, I’m not alone in the appreciation of the ‘traditional’ gaming form; The inaugural Playup After Dark was packed (literally, we were booked out), teeming with people keen for board games and beer. There were so many people there, in fact, I wasn’t able to try out every game on offer, but let’s start with the ones I did manage to get my hands on… 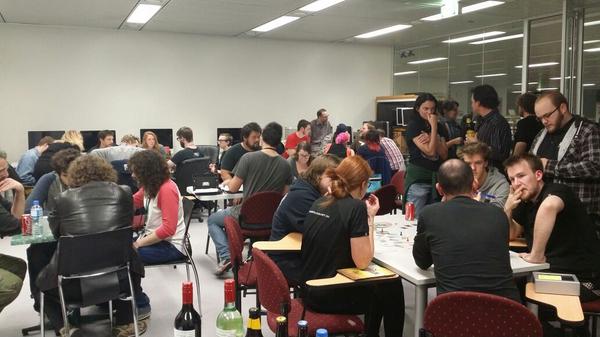 Born from a Game Jam 2 ½ years ago, Wesley Lamont’s Cogz is all about making colourful chains. The board is made up of square pieces with coloured pipe segments on them, each piece having two segments on it. The aim is to make long pipe chains of all four colours by swapping pieces in and out from your hand with those on the board. Your score is counted by colour (one score for each), and the lowest one is what counts at the end. Where it gets dastardly is when chains of one colour meet end to end, causing them to lock in place for the rest of the game. Sounds simple right? Well, that’s because it is.

It’s strength is it’s deceptive simplicity; everyone who wanted to try it out sat down, read the rules, and instantly understood what was going on. Because you’re usually looking for one specific colour to take advantage of, the board never looks intimidating, and games are quick enough that you’re left wanting to play again. That said, there’s enough depth to the game to keep the most meta-craving of players happy, myself included. It strikes a nice balance to bring both new and old players back into the game without getting bogged down by rules or technicalities.

On the night, I got to try a team variant of the game where you had to collude with whoever sat opposite you, negating each other’s lower score in each colour in favour of the higher one. I thought it actually worked really well: My partner and I tried to advise one another, but neither of us could carry the duo since we didn’t know what tiles we had. This kept turns quick and teaming relatively fair, avoiding the 10 minute strategy sessions that can plague team games dominated by the meta-cravers.

COGZ is scheduled for crowdfunding on Kickstarter in August. Get hyped!

Cave Troll in my Pocket

After quickly moving on from the obvious, “Is that a troll in your pocket or…” jokes, Glen Spoor explained Cave troll in my Pocket as a simple yet incredibly complex game like chess. You either play as a troll or three boys. The boys have to prove there is a troll by gathering evidence and returning it to the village without being eaten by the troll on the way. The troll wins if he eats all the boys or reaches the village at night time. This all plays out on a tiny, tiny board and is supplemented by action cards, which is kinda the problem.

When I played as the boys, both the troll player and I agreed that the game was very much favoured towards the troll. As soon as one of the boys was eaten, I was boned. Because the hand sizes for the cards were so large, for every card I had to incite an action, the troll had a cancel for it. It wasn’t a one-sided battle by any means, but it was clear that the troll had the easier path to victory. Mind you, when the game worked, it was good fun.

The board was tight with only eight spaces to move across, but this also meant every decision had weight. As in the late game of chess, there were only so many possible moves I could make, so what really mattered was how I set up the boys’ position to make the troll react on my terms. It was extremely satisfying thinking ahead to try and force the troll’s play, even if it was countered by the frustrating card-play. The hidden tactical depth made this innocent looking game quite a bit more interesting than a simple game of Poker.

Glen Spoor’s second offering of the night was Colossus Awakes, a hex-based blend of resource management, town building, and combat. Upon seeing the board, my inner nerd lost it. The game’s played on something like a 23×23 hex grid, you have access to five heroes, there are sliders keeping track of events, and tokens scattered EVERYWHERE. The beginner’s rulebook (ie, the bare minimum rules) was four pages long, which should cement the idea of how insane this game seemed.

I wasn’t able to play the game myself, but the general reaction was that no one really understood how. Even looking at it, I could tell that this wasn’t a game you’d crack open for a bit of fun, this was a game you set aside a day for. If you looked away for more than 10 seconds, you’d be lost again. Glen openly admitted before the night got under-way that this was the game he had shoved every mechanic he could think of into before peeling them back, but something tells me that more layers would need to be removed before most people could really sink their teeth into it.

Glen’s currently a lecturer of game design and culture at Edith Cowan University and his website can be found here.

The final game of the evening was Anthony Sweet’s Breakwater, a jazz-fueled parade simulator that ran on clockwork. From what I could gather, the premise of the game is to guide the lords of Breakwater into various districts of the city via parades, which are purchased using a nifty resource system. Part of the board is a large clock used to track the day-night cycle and collect available resources. Unfortunately, that was as far as the explanation went without explaining every element of the game, but I was assured that it all flowed smoothly together.

The initial learning curve was apparent with everyone I talked with, but once they were in the game, remembering the rules seemed to be carried by intuition. Turns were quick, down time was bearable, and figuring out what to do next wasn’t just an exercise in number-crunching. There were apparently ways to ‘clock-block’ your opponent from acquiring resources, but without being able to play the game myself (sorry, Anthony!), I can’t say much more than ‘I really want to play this’.

Aside from missing out on a couple games, I thought Playup After Dark was pretty fantastic. Everyone who played a game had great feedback to give the dev, and the bar helped provide a more mature ambience to the adult-filled room. Thanks to everyone who came down, and If you weren’t able to make it to this Playup but want to check us out, we’ll be announcing Playup #4… Soon…

Playup Perth is happy to announce that we are partnering up with local gaming news aficionados, GameCloud. Each month, they’ll write up their own thoughts from each playup and help provide feedback alongside those from the Playup Perth blog.

Established in 2012, GameCloud is a not for profit website that specialises in writing quality game reviews, as well as unique articles and opinion pieces, aiming to help represent Perth in the global games industry.